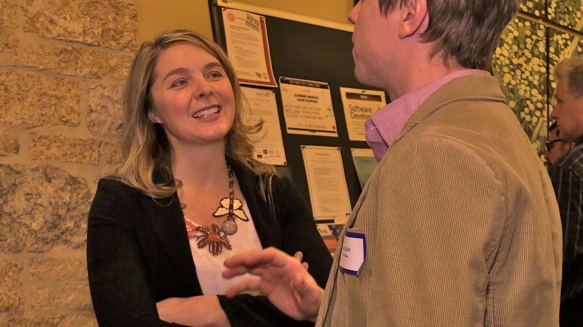 By MAGGIE M, Editor, http://thewedge.LIVE | Host “WHERE IN the wedge IS MAGGIE M?”

The evening of February 7, 2017, was special to the wedge as a rising figure was speaking at The Marshes Golf Club, the famous Tech Tuesday event where leading engineers and futurists gather monthly. Despite treacherous weather, the place was stacked.

Jenna Sudds, a mother of three, a genteel ‘championista’ of technology, is Executive Director of the formerly named Kanata North BIA, now rebranded, Kanata North Business Association. Sudds’s energies are not spent in the beautification of and coralling of retailers in the area, the usual turf of BIAs. Her mission has evolved into the unwitting Spokesperson for the fastest-growing tech region–and the largest–in Canada, the Kanata North Technology Park.

Sir Terry Matthews is certainly the Great Mascot for the Park and the impetus to its success; but, in this arrowhead-shaped land, measuring less than a square mile, Sudds is an Ambassador of sorts. She joins a delegation including Sir Terry and Mayor Jim Watson, all going to Queen’s Park this early March, “to raise awareness of Kanata North’s potential and its advances in self-driving, autonomous vehicle tech.”

Many Canadians are unaware that Kanata North houses the highest concentration of engineers and innovators already impacting the world’s future. A first map drawn up by Sudds and her team makes an instant statement about the brain and tech power within this real estate; however, many businesses are not featured here since they are too numerous. (I understand a second edition is in progress due to its popularity.) 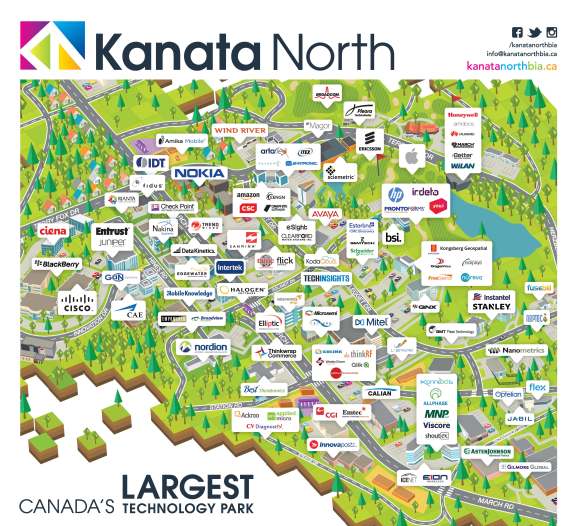 Sudds put the Park in perspective in her presentation last night. To witness the statistics on screen for the first time, makes you want to run and ring L-Sparks’s bell. (L-Sparks is the Business Accelerator renown for its SAAS launches, and headed by Leo Lax. When I visited, they rang a bell with each sale made–or an angel got his wings.)

Kanata North is a burb of Ottawa; yet, it contributes almost 14% of its GDP. Say what? That patch of land? Yes. It is a success story that needs to be, “hit out of the Park,” literally.

The street signs state in bold, “SERIOUS TECH LIVES HERE. KANATA NORTH.” And during the day, 21,000 work there.

(The audience chortled at Steve Langford, VPM Wesley Clover, when in his introduction of Sudds, he lamented Kanata North’s speedy growth and corresponding slow, “speed of traffic.”)

Stay-tuned for many future stories on this amazing hub of innovation.