Rain has been testing the mettle of men and their many projects from lawnmowing to filmmaking. It is after all only water, not fire and brimstone. Umbrellas and rubber boots are making good business these days.

It rained all morning on May 30th; so, I thought plans to cover a film crew in Westport, Ontario, would be dashed. Nevertheless, I ventured out.

It seemed I brought the sun with me in my trunk and hung it in the sky like an umbrella. The afternoon was pure bliss, sunny and dry, a perfect backdrop to the filming of Gentle Bend. This 10-year-in-the-making episodic story, co-written by Norman Berketa and Allison Graham, is finally moving toward screens in the making of this pilot. The two co-creators hail from Ottawa and Perth respectively.

Westport was chosen as the ideal small town location. “The kinda town where everyone knows each other,” Graham explains. Wesport’s last census reports a population of 590. This dynamic underpins the story.

I won’t be a spoiler by disclosing the story line; but, suffice it to say, the main character, Ben, is a victim of sudden events over which he has no control.

“It’s a story of redemption,” Graham clarifies. In the story, Ben, played by seasoned actor Christopher Wyllie, makes peace with his circumstances. It is ostensibly a good story with bumps along the way and a cliffhanger to keep you waiting for the next episode.

I asked about the genre, guessing ‘comedic drama’ and Graham confirmed. This will bode well for distribution especially Netflix who frankly are lacking in Canadian content. I cannot wait to see the show air. It is projected to be ‘in the can’ this Fall. The last interior scenes are being  shot in Ottawa this Saturday. Post-production ensues with editing, scoring and the production of a 3-4 minute trailer.

Both Berketa and Wyllie are also musicians, able with many instruments including guitar,  piano and drums. Berketa wrote the lyrics and music for the opening and closing segment. Each episode will end with a unique composition capturing its scenes. This is extra work for the musical duo; but, may add to Gentle Bend, a rich talking point.

I was impressed with this small crew each member wearing many hats. When I asked Hayley Berketa to describe her position and tasks, her proud father and Director responded, “she’s the Best Boy (industry term), best everything.” Hayley works in the industry and with time-off was poised to help. She was the clapper handler too, for each scene, each take. I love the power of the clapper. This tool brings everything and everyone into submission to the lens and sound device.

Tension and swelling personalities usually populate film sets; but, not this film crew. The camaraderie among them was palpable. It is pure delight to witness a group of creatives working expertly toward a vision, buoyed by their passion for the art. This film production company, Creative Pictures, is one to watch. 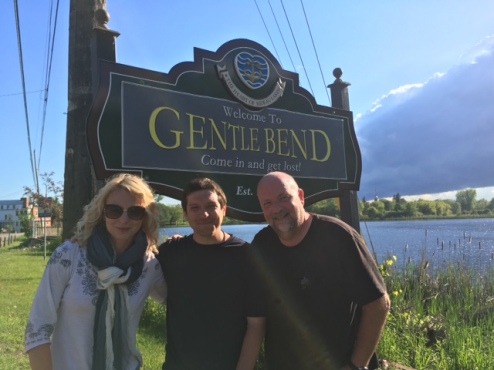 “What I love about this show, we are a group of friends that want to tell a story,” waxes Graham. “I see our viewers sharing the Gentle Bend first episode with words like, “You won’t believe what I’ve just watched!”

I wait on tenterhooks for a smart network, Netflix, on-demand or other to snap-up the rights to Gentle Bend. I wonder, what happens to Ben in the second episode? 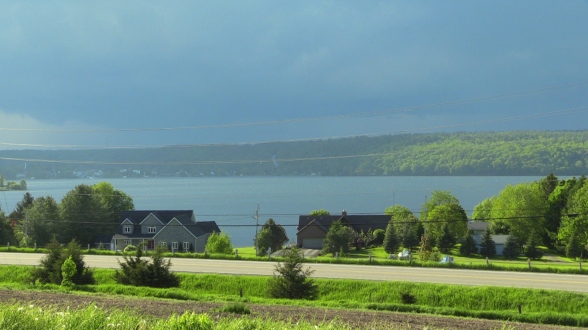 View of Westport, Ontario, from Hwy. 15 Northeast. The storm returns May 30. PHOTO BY thewedge. LIVE