Arnprior / Ottawa Valley / Renfrew County / The Wedge / What To Do 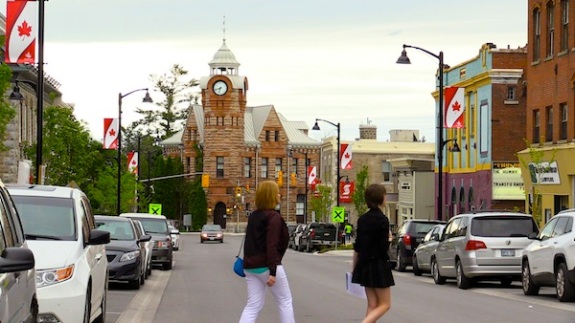 Last week, this writer drove into a town that had been in my thoughts for some time; but, until then, my feet had not touched its soil. Arnprior was astonishing and an exhilirating discovery. It is unquestionably a ‘must visit’ travel destination.

Tallest tree in Ontario at 47 metres, Gillies Grove, Arnprior  PHOTO BY the wedge.LIVE

There is a bit of a nerd in this writer in that I could not wait to lay my eyes and lens on Ontario’s tallest tree. At fourty-seven metres (equal to thirteen stories), the two-hundred year-old Eastern White Pine at Gillies Grove was an impressive sight.

I was accompanied by the Town’s official, Lindsay Wilson, to view this wonder. I would not have found it on my own; however, a gazing bench on the path near its base is a signpost. The forest is oddly located in the heart of town and well traveled by locals on foot. It’s so dense and tall, daylight struggles to break through its canopy.

I could have lingered and found a way to capture the tree all the way to the top; instead, we had each others’ backs, swiping vampiric mosquitoes from each other. It was all too comical. The soil was damp and it was the end of the afternoon, not ideal for setting up still photos in any forest; so, I recommend a midday visit.

These white pines were the impetus to the logging industry and Arnprior’s economic start not long after 1823 when the first settler arrived. The Town has a long history, much of it presented in its museum conveniently located at the heart of Downtown.

Iconic clock-tower at centre of Arnprior is actually its museum. PHOTO BY the wedge.LIVE

A few visitors have raved to me about its Curator’s ingenuity–this venue is on my next visit checklist now.

This town of 8,795 (2016) grew its population by 8.5% between 2011 and 2016; much of the growth is accredited to the widening of the 417 highway. Arnprior is now only 30 minutes from Ottawa and 20 minutes from Kanata, the biggest technology centre in Canada. For some inexplicable reason, some people imagine it to be further; yet, it is one of the most accessible escapes for Ottawa, perfect for people short on leisure time.

Downtown is in the final stages of its revitalization and the transformation is beautiful. This is likely contributing to Arnprior’s desirability. Ottawa and Kanata are bursting at the seams; so, the town is a natural choice for those seeking proximity, value and to maintain their lifestyle. The town is replete with trendy restaurants, pubs, shops and outdoor escapes. (Stay-tuned for next week’s reveal.)

View of the beach from the top of Robert Simpson Park, Arnprior. PHOTO BY thewedge.LIVE

I made a short drive up John Street to Robert Simpson Park, a jewel on the edge of both, Ottawa River and the Madawaska River, where the two rivers meet. This manicured park is large, raised on an escarpment, offering wide and long views of Ottawa River and Quebec. You can drive down a path to its base for a swim at its impeccable, Lifeguard supervised beach. This park is the pride of the town and for good reason. 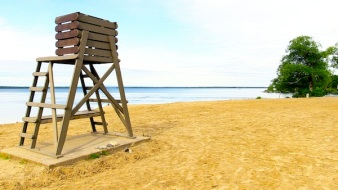 I found a perfect bench to take-in the view and settled in. Little did I know I would encounter a gang of predators. Suddenly, I was Tippi Hedren in a Hitchcock film. These scoundrels circled me, plotting to steal my Valley Roots beef wrap, a considerable meal from the local, top-rated Butcher.

I thought  I heard the kingpin say to the group stalking me behind my bench, “You distract her and I’ll grab the loot.” So in my wisdom I stood, waving my arms, and headed to the rear of my bench. I turned my head, hearing movement, to witness the leader of the gang snag my dinner as fast as you could say, “squawk!” This was a declaration of war.

Seagulls have studied us for a long time, across the Northern hemisphere; but, I too know how greedy and merciless they are. The wrap was still large, half-consumed, and Mr. Smarty-pants dropped it. So, I snagged it from his beak. He and his gang of thieves were no contest for my wrath. I bagged the carnage, deemed for a refuse bin out-of-town. Let them eat cake! Next time, I will be equipped with weapons of mass scattering– noisy rattles come to mind. Below is where this unreported crime occurred, the “bench of tranquility.”

One of many benches to take-in the view. Robert Simpson Park, Arnprior. PHOTO BY thewedge.LIVE

Another interesting highlight, Arnprior produces considerable power from its dam. A weir reduces its surges and to boot, spawns new life at its base with fish breeds such as muskies. The outcome of the weir makes fishing a great sport on Arnprior’s public docks, marina and water’s edge.

There is no better conclusion to a full day of exploration than to stop at one of its two ice cream kiosks, across from each other at the epicentre of town. Kawartha strawberry ice cream is my favorite and there it was, waiting for me; it made my return road trip so much sweeter. Next visit, I will try Tracy’s across the way.

This story is not complete without pushing in for a tour of the town’s best. Keep posted for a whole new vantage point, inside, up-close and personal, next weekend.

Popular Museum at epicentre of Downtown Arnprior. A ‘must see.’ PHOTO BY the wedge.LIVE

Partial view of marina at sunset on Madawaska River, Arnprior. PHOTO BY the wedge.LIVE

Beach on the Madawaska River at sunset, Robert Simpson Park, Arnprior. Great for lounging and dropping a fish line. PHOTO BY the wedge.LIVE