Entertainment / Leeds Grenville / Prescott / St. Lawrence / What To Do

“How fast can you recite Hamlet’s soliloquy?,” I asked Ian Farthing, Actor. He is one of a cast of three joining Susie Burnett and Helen Juvonen in the final St. Lawrence Shakespeare Festival stage performance of 2017, “The Complete Works of William Shakespeare (abridged).” Do not miss the humour in the key word, “abridged.”

Rebecca Eamon Campbell, Stage Manager, and Farthing could not be more obliging. Campbell summoned Farthing from what seemed another dimension, in an instant. He sprung a King’s wardrobe and met me centre stage.

“Do you have a skull?,” I asked Farthing. Immediately a hand holding a skull appeared at the curtain seam. This team has timing and comedy, off-stage. Then he struck the famous pose, Prince Hamlet of Denmark holding Jester Yorick’s skull, with an uncharacteristic ‘Cheshire’ grin.

I primed my solicitation of Farthing’s impromptu performance, speeding through the first lines, “To be or not to be. That is the question. Whether ’tis nobler…” He ensued, speedily, deliberately slurring. I closed with cymbals (metaphor), “Aye there’s the rub.” Farthing delivers. So much fun.

This show tonight 7 pm or tomorrow 1pm are not to be missed. Pack a lawn chair, some snacks, for this grand finale. Arrive in town early to catch another rare, big show. 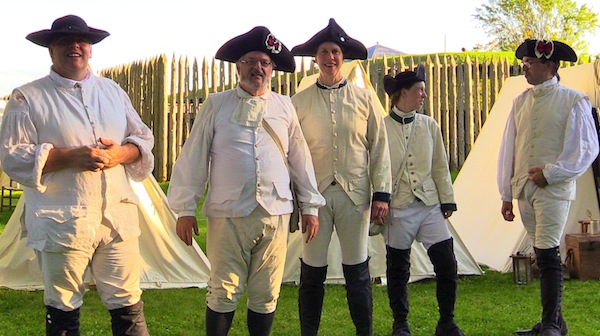 The 85th Regiment de Saintonge hailing from Sudbury greeted this writer, blending lexicons, old and new. They are an ensemble cast, comedians all. Your eyes do not fool you in the photo above, women are Reenactors too. No crinolines for these lad-ies.

This Regiment, the French ‘white coats’ supported the ‘blue coats’, the colonials of the day. My father was an avid Reenactor and passionate about local history years before his passing. He would have bristled with excitement meeting this Regiment.

“So what’s the plan tonight?,” I inquired. In unison, all raised their voices, “Dinner!” This night apparently did not involve gnawing flesh off the bone by a fiery pit. For this night, it was a little more civilized. Reenactment food prep and degustation would begin on ‘the morrow.’

Be prepared to hear cannons go off intermittently–and a few guns. It is truly exhilarating to transport yourself back in time, averting your gaze from modernity. These Reenactors are precise in taking you back in time with one exception, they smelled wonderful. Bathing was uncommon in 1813. Hopefully, when you arrive they will have donned ‘eau de Fleecy’ for an authentic olfactory experience. I commented on their lovely fragrance and they assured me, “wait till later tonight.” 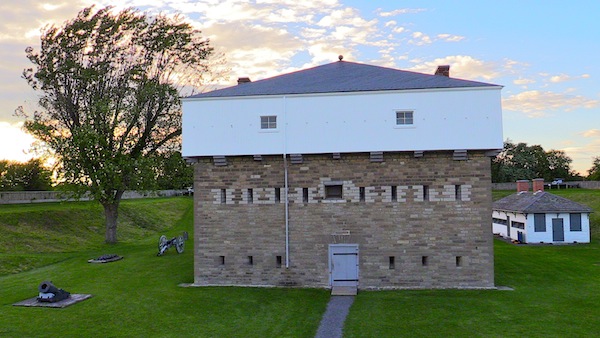 Fort Wellington as restored in 1846 seen from inside ‘earthworks’ walls at dusk, 6-pounder field gun on left, latrines on right. Prescott, Ontario, CANADA. PHOTO BY the wedge.LIVE

Let it be known how important this fort was. Had United States–one mile away–captured Prescott, Upper Canada AKA Ontario would not exist today. (See my quick video produced a year ago below.) Ontarians and lovers of Canada the world over must put Prescott on their ‘bucket list.’

Get on Maggie M’s virtual tour bus and see the sites in the following. 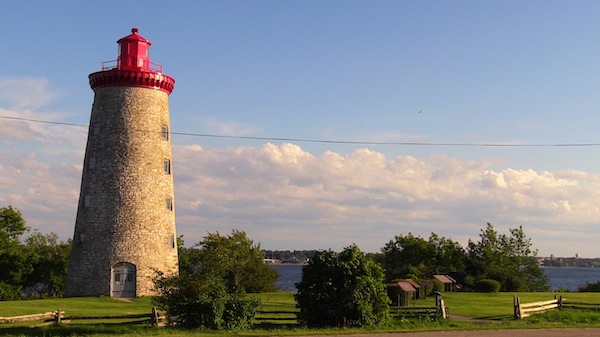 Site of the Battle of The Windmill 1838. Many died trying to liberate Canada from British rule. Immediately East of Prescott, Ontario, CANADA. PHOTO BY the wedge.LIVE 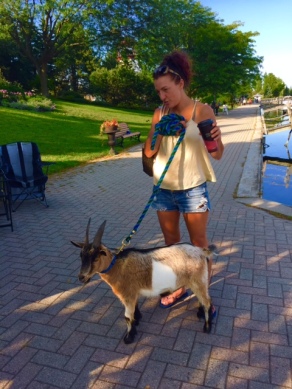