Attractions / History / Lanark County / Smiths Falls / What To Do

This writer was an accidental tourist at Trainfest, August 26th. I immediately realized this event offered far more than met my eyes from the road.

I stood on the platform as a black 1912 steam locomotive barreled toward me, whistling, coming to a full stop. The engine weighs 77 tons and the tender 62–that’s 139 tons. This train gripped me at first sight.

I looked up and spotted the Mayor of Smiths Falls, Shawn Pankow, standing with the Conductor. I chuckled as it throttled my wandering mind back to the present. Snap!

I settled within myself, this was no accident. I had little time to cover the whole event as I had another media engagement; yet, I raced to collect my equipment and capture it nevertheless. I’m remiss as I could have spent another two hours exploring all exhibits and choosing train memorabilia. 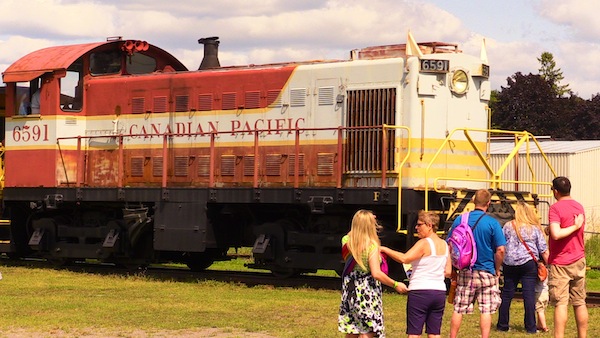 A large vintage Canadian Pacific train circa 1957 traveled on tracks around the outdoor venue carrying visitors, embarking, disembarking, on fifteen minute loops. I did not make it onto these trains; but, I ventured into the stationary, “Dental Car,” an impressive coach that featured everything including a room for dental care. 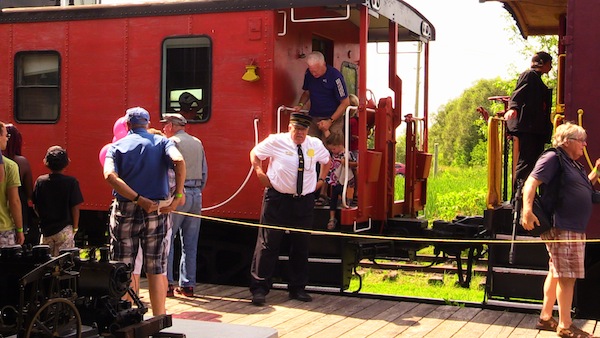 This writer was inculcated with the love of trains from the time I was a toddler. Our home featured a huge table covered in tracks, train sets propelled by electricity and the perfunctory rural town maquette as backdrop. I muse, we need more train sets in childhood than mobile devices. The children present clearly were enamored and enjoying themselves–no screens in sight.

Trainfest is a ‘Go To’ event steeped in history. Its immersive exhibits are presented to the smallest detail, reenacting the height of the rail era. The museum is open to Mid-October, 10am to 5pm. Train rides will occur again on October 7th and 8th. And on December 2nd and 3rd, the North Pole Express should add drama as Christmas approaches.

The Wedge will be back.

Young Hayden Merkley, “Mr. Everything,” greets guests at the Railway Museum of Eastern Ontario, until he returns to school, Smiths Falls, Ontario, CANADA. PHOTO BY the wedge.LIVE