Brockville / Leeds Grenville / St. Lawrence / Thousand Islands / What To Do

I was struck with a revelation about Brockville mid-summer. Sure, it’s a beautiful marine city as I have previously written and photographed; but, there is a lot going on beyond the sight line, below waters and below the ground.

I attended Centeen Park, Brockville’s renown dive site, to gain insight on the location. I strongly encourage those who have never scuba dived to add Centeen to their 2018 travel plans–or race to it this weekend. All the gear you need is available across the street, including beginner classes.

Below the water, an impressive gallery of life-size sculptures stand erect, carp, pike and bass swimming among them. It is a production by Save Ontario Shipwrecks (S.O.S.) represented in the excellent diagram below. 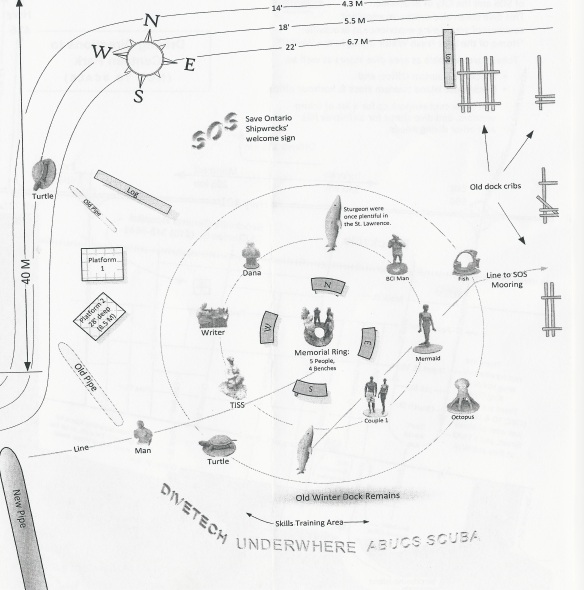 Enjoy the following video shot underwater. Divers installed sculptures including five figures memorializing persons who succumbed in the waters (see centre of the diagram above). In the video, note how the figures’ arms are crossed over their chests. It is very thoughtful and quite touching.

Centeen Park ranks among the top diving sites in the world. Brockville boldly states it is, “Home of the Best Fresh Water Diving in the World.” This is the consensus.

The St. Lawrence is rich with diving sites. Wrecks are a destination for careful study by expert divers; but, Centeen offers an exciting feature attracting new divers. The underwater sculptures were created by local artists, Dave Sheridan, Stephen Hatch and students from the Thousand Islands Secondary School, and Brockville Collegiate Institute. They are near the shore, a mere 20 metres out and further. You cannot see them with snorkling gear; the creations are deeper up to 45 feet down. Visibility is from 5 to 50 feet.

Now I turn your eyes to Brockville’s latest underground feat, the transformation of Canada’s first railway tunnel into a pedestrian experience.

Brockville Railway Tunnel colours shift continuously along its length, Brockville, Ontario, CANADA. Note the light at the far end signalling its length. PHOTO BY the wedge.LIVE 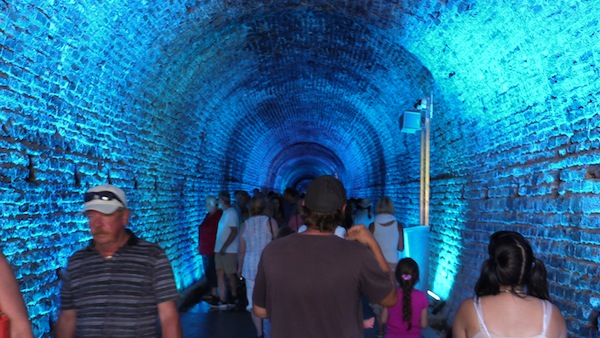 Brockville’s Railway Tunnel made good use of old infrastructure, creating an immersive sensation with a looping light show and the corollary echo from its domed ceiling. ‘The Tunnel’ drew high numbers of visitors on opening weekend, August 10th to 13th.

“Did you touch the walls?, inquired a volunteer. “O! No!,” the man with the soot thumbprint on his forehead replied.

The walls still bear the residue of coal fired engines and it’s advised not to touch them. I imagine the walls should be stripped clean soon with visitors evidently unable to resist.

I have heard stories from the days when the trains were operating. Locomotive engineers collapsed regularly from the fumes trapped in the tunnel. It had its flaws; but, this smart  City transformed it into a major attraction in 2017.

To conclude my underworld musings, I would be remiss to leave out, Aquatarium, at Tall Ships Landing. This aquatic life museum offers a few opportunities to be submerged without diver gear. It is the closest you can get to experiencing the St. Lawrence in its depths–without a towel. 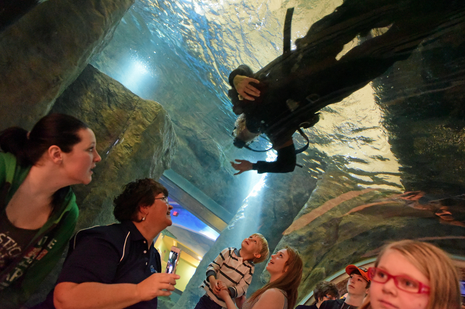 All of these ‘underworld’ attractions are within a short walking distance from each other in the heart of beautiful downtown Brockville.