Independent, local retailers have united and gone to battle today–and will continue this week in the wedge (East Ontario). Their Black Friday deals are impressive, rivaling big box by price and quality–and fun. They are well armed with service, stock, Christmas cheer and deals. We just featured a campaign for Downtown Arnprior , a microcosm of widespread collaboration that magnetizes shoppers away from big box–Walmart especially–and cyber entities.

Downtown Brockville is the poster child for this local revolution. They are raising the Shop Local Flag on December 4th, in a ceremony sending a message to global infiltrators who have destroyed local economies–entire towns. This signals a push-back from small retail businesses that will not cede their former dominion to global, “assembly-line-made-to-break-products-from-emerging-nations-inside-metal-hangars.”

“It takes a village” takes on another meaning these days.

“Black Friday is one big day you can put money back into the community. Most of our shops are cutting prices 30%–many 40% to 50%,” says Hillary Geneau, Executive Director, Downtown Brockville BIA. Even Aquatarium.ca is offering an $8 entry fee for everyone–usually $15.99 for adults.

Among monopolistic threats, Amazon is rising; but, not without opposition. Anti-trust action since the acquisition of Whole Foods looms in U.S.–as it does for Facebook and Google. Debate in the Capitol is feverish on whether these companies have become too big and too powerful.

Amazon sell a lot of third party items; not everything comes from their warehouses. They have also been in the “used books” business for years; so, it stands to reason they offer used items across the board. These can be pricey compared to local consignment and used, “previously loved” marketplaces.

Alternatively, Amazon branded deliveries left on doorsteps occasionally disappear. Theft is a big issue for them. Pick-up stations are now the alternative choice; so, the convenience of home delivery disappears. Returns are likely when you cannot touch or try on the product purchased. These are weaknesses in the cyberworld–and annoyances.

Amazon has sliced into Walmart’s revenue resulting in hundreds of store closures ; so, independents are battling a weakened behemoth. Walmart reportedly do well in Canada; but, the verdict is still out. They have stopped delivering direct (my daughter used to order kitty litter and receive the next day) and do not price match from the internet–only with printed flyers. So 80s and 90s. Amazon robotic distribution centres have left Walmart’s “just-in-time” logistics in the dust. They simply did not deal with “the last mile” where Amazon is winning–sometimes. I can hear their teeth gnashing at the sound of whirling robots in Amazon’s massive, new warehouse in Brampton. I feel no pity. 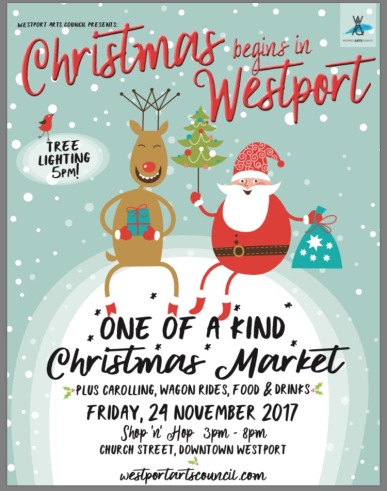 Amazon is launching many retail outlets in US under the sub-brand, Amazon To Go. From these stores, they are reportedly studying shopper behavior. Something is afoot. If they think AI (artificial intelligence) can compete with a warm-blooded, human shop owner who remembers your name and tastes (and actually cares), they would be deluding themselves. Shopping is two-pronged : a necessity and an experience. The computer screen is losing its excitement value. It is becoming quite quotidian. People long to see, press palms with and talk to people, studies show (more on this to come.)

Westport is running their Shop and Hop event today. This town offers  real value–items that are high quality, replete with artisan works (there is even a bamboo everything shop.) The town is delivering a Christmas extravaganza. Physical, emotional experiences such as these, Walmart and Amazon cannot mimic.

Town and cities in the wedge are pulling out all stops to create a united front. Together, they are a force; alone, not so much.

Stay-tuned for more on the Shop Local Revolution–it’s bigger than you think.