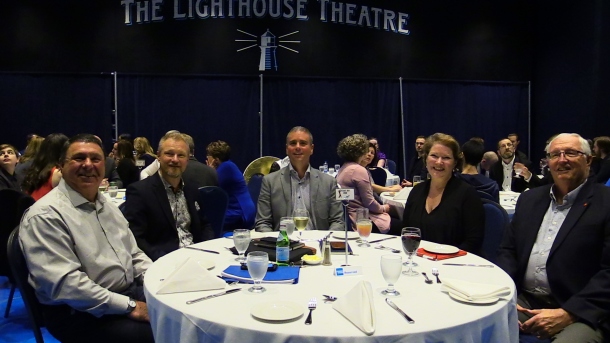 A kinder, gentler breed of investors sat up-front at Otter’s Den, Brockville, listening to 15-minute pitches from five start-ups and entrepreneurs.  A Q & A session ensued, questions exclusively from the Otters. Occasionally, tough questions and critique kept the audience of 90 guests on edge.

It was a fund-raising event for Big Brothers and Big Sisters of Leeds Grenville (now merged) held in the sumptuous Lighthouse Theatre at the Aquatarium last Friday evening. At $75 per plate, revenues covered costs and left a tidy sum for the organization.

The evening began around 6pm with networking, cocktails and canapes. Conversations struck-up around Aquatarium exhibits and in the theatre. The Rifle and The Writer amused the crowd with their music. This was well planned. 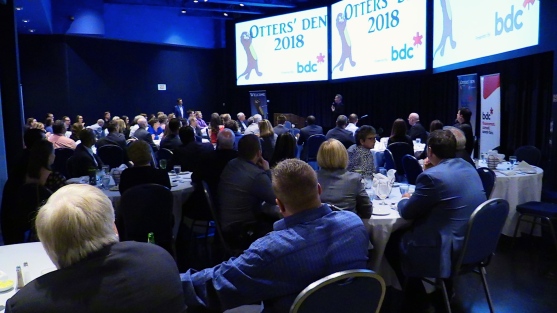 The “Who’s Who” were present, not just among our illustrious Otters; but, also present, Mayor of Brockville, David Henderson and Ontario MPP, Leeds Grenville, Steve Clark. They closed the event with kind words.

BDC Vice-President, Eastern and Northern Ontario, Kunle Tauhid, spoke passionately. “To be behind Otter’s Den was a ‘no brainer’. It warrants an applause to the investors who came.” Indeed. 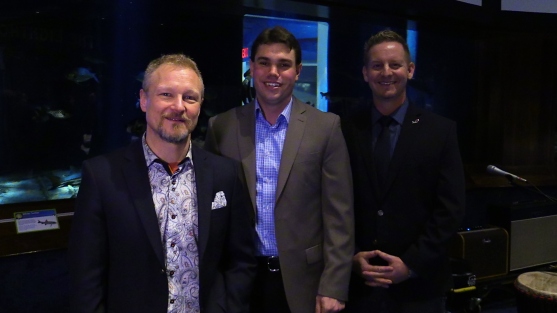 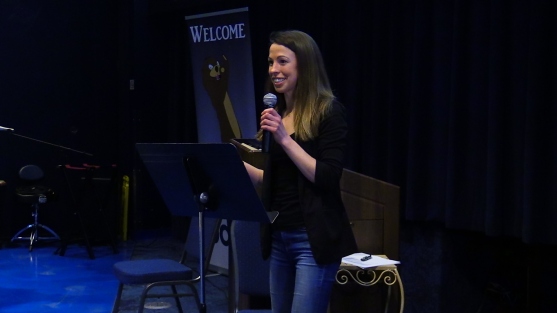 Local, fresh food from our farmers here in the region is foundational to this start-up. Vegetables, fruits, meat, dairy, bread and prepared foods will be featured at By The Season‘s on-line store. High-in-demand products such a bone-broth are already sourced. Access is its next phase. Sara Nicholson was seeking $25,000 for a vehicle to deliver to retail, foodservice, corporate and residential customers. Included in the total was an upgrade for refrigeration. An Otter urged Nicholson to market to Ottawa. Nicholson might have had local market demand stats at the ready; yet, we all know there is a global shift to wholesome foods.

Adamcryck admitted to closely following By The Season for a year now. 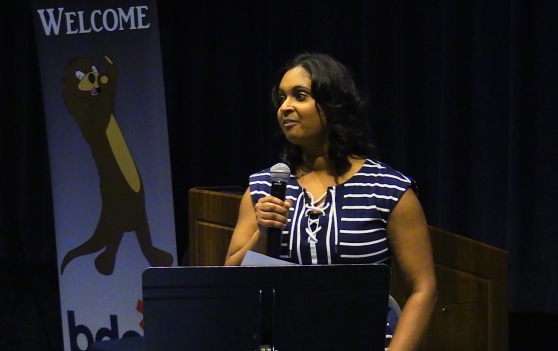 This company is already producing original handbags for the nautical market. They were seeking money to add sewing machines and staff, thereby increasing production. They took a scolding on marketing from one of the Otters; yet, their presentation was excellent. They distributed bags throughout the audience. Evidently, they were well made. Nandoo incorporated videos into her power point presentation. It was hilarious to see how much fits into a Drop Handbag–and in separate pockets. Their branding was excellent out-0f-the-gate.

Adamcryck was pretty witty addressing the crowd, “Did everybody give back the handbags?” 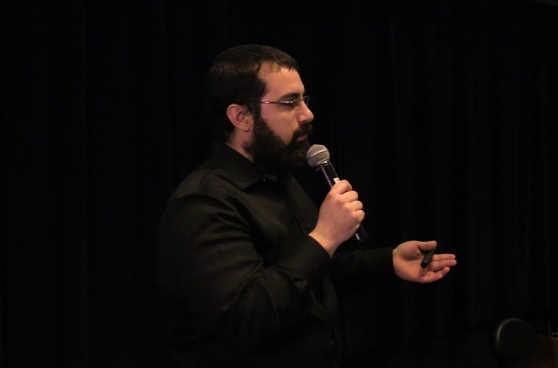 This Beekeeper is a growing concern. Clearydale Honey is already producing and distributing unpasteurized, natural products in the region from its commercial location in Spencerville. Connor endeared himself to the audience; he was authentic and sincere. He made a good case for preventing crystallization of honey by installing floor heating. He showed his year-over-year profit gains–music to investor ears. Sadly, the audience did not get a taste test–that was a missed call; but, his Power Point was thorough. Meanwhile, we salivated for the honey staring at us from a jar. 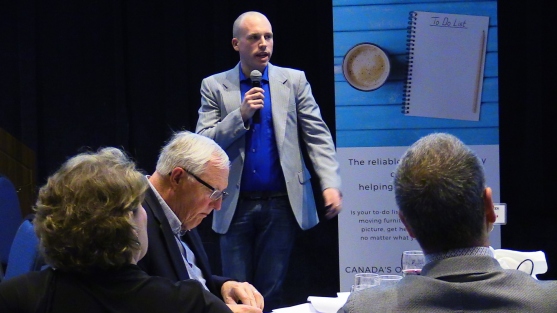 This was ostensibly a mezzannine ask i.e. beyond start-up. Kemptville company, Nowtaskr, asked for $250,000 for their “labour-on-demand” service, on-line and off. Founder, Chris Melnick-Macdonald has a background in the military, specifically geospatial intelligence. He shared the irony in his degree in archeology. The Otters responded to their difficulty in scaling the company’s labour pool. 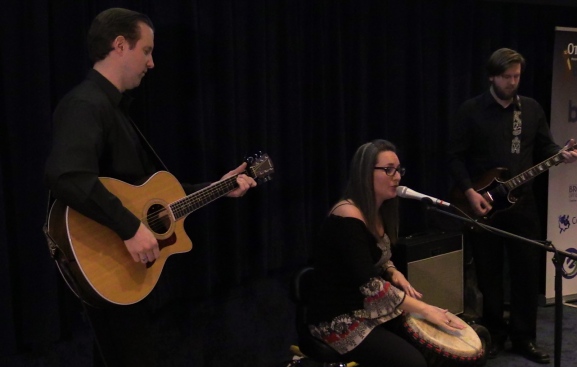 This musician was looking for $25,000 for equipment and to develop a music brand, Keeley Music. The start-up aim to market on-line and target weddings and corporate events in the region. This was the most early-stage, proof-of-concept presenter of the night. A musical performance and a speech were the sum of her presentation. A Power Point presentation would have helped to flesh-out the strategy and financials. Keeley was the first presenter of the night and a pleasure to the ears.

Everyone asks, “Who won?” It’s not like Dragon’s Den™ where deals seem to be made live on television. That’s entertainment. The investors walk-away and may or may not invite presenters to a next meeting. Cole states, “Typically within the first 2 weeks after the event the investors meet with the presenters and they work together to complete a deal if one will be available.”

Based on the feedback received in the short time already – it is highly likely this event will run again next year. We had at least 20 people request a pitch package, over 90 people in the audience for the event. BDC has been a pleasure to work with on this project as they’ve been a big help since they agreed to support the event. Our vision would be to continue growing the event, it is a great opportunity for business to seek local investments from people who can also provide ongoing mentorship. Going to typical funding is all around us, but the value you receive from the Otters’ in mentorship alone is essential. Not to mention the feedback you receive the evening of during the pitch should your business not move forward.