Something remarkable is evolving quietly in our region thanks to “out-of-the-hive” thinkers.

Urban farming is not new. Initiatives have been showing up in the oddest places in urban centres, Toronto, Paris, London and New York. A recent development, mostly in the last four years, is beekeeping on rooftops.

A few forward thinking businesses in Kanata and Smiths Falls have joined this smart rooftop initiative, empowered by a beekeeping couple in Ottawa.

“It is a great use of rooftop space,” says Dan Andress, store owner, Andress’ Your Independent Grocer, Smiths Falls. “The bees go about the daily work pollinating neighbourhood gardens, terrace top and balcony flower pots, our trees and so much more.”

It seems bees favor their hives a little higher up rather then on the ground. The limit is reportedly ten metres. The height is no challenge to bees who travel 5 kilometres to find nectar.

This is a good development following years of decline in bee colonies. Honey production is now spreading to private residences, public places and private entreprise. This natural food is replete with health benefits and is high on grocery lists.

The London Stock Exchange and the Scottish Parliament both keep bees on their roofs. Here in our region, The Brook Street Hotel, Kanata, and Andress Your Independent Grocer, Smiths Falls, are the “first movers”, businesses embracing this food production modality.

Andress added one beehive in 2016 and another in 2017 on their rooftop. They hired a young company, Gee’s Bees, Ottawa, to set-up and maintain the hives. Matt and Marianne Gee are its Founders, and “accidental beekeepers.”

In 2009,  they discovered a hive–and lots of honey–between the two floors of their home. Instead of calling an exterminator, they became “bee whisperers” corralling the queen and her drones into hives in their yard. As the word spread of their method, people with bee infestations sought the Gees to resolve the problem in like manner. The rest in history.

Their business model is clever, opening up beekeeping to communities and pushing back a serious environmental problem. Let’s not forget bees are responsible for pollinating 30% of our vegetation.

Last week, this writer scaled a ladder and made the challenging leap onto Andress’s roof to see this for myself. It seemed so counter-intuitive; now, it seems so logical. The two hives were still wrapped to keep its residents warm. A lone drone buzzed around us before re-entering its hive. We offered no prospect for nectar, so off he went. These little fellas are so focused. 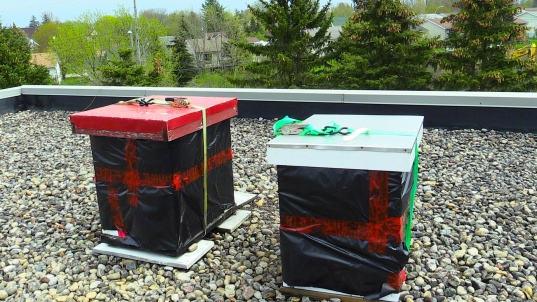 Andress gifted me with two jars of its precious unpasteurized honey from his private reserve. It’s a morning treat and a healthy alternative to refined sugar. The 150 jars which the two beehives generated sold out in one day, late Summer 2017.

Andress has evidently become an unwitting spokesperson for bees, speaking of their habitat and behavior with ease.

“I am not the expert on bees. I will leave that up to Marianne Gee, but what I have been told the bees in the spring feed on tree flowers and dandelions. It is important more than ever with the population of bees on the decline to remember, dandelions are an important plant to bee production. They move on to summer flowers and in the fall, goldenrod, buckwheat and purple strife.”

“The bees do this and you do not know they are even there,” Andress adds. “If more businesses had rooftop hives, I believe we may see the bee population bounce back. It’s just open space on our rooftops – why not add a beehive! Without the bees, we will have to use mechanical or human pollinators. The cost will be passed on to the consumer and it could be expensive.”

This is yet another forward thinking move for this rural business leader. Just last week, we covered Andress’ early foray into on-line groceries, launching this May 16th–tomorrow–to the public.

He concludes, “Right now I have two hives and the production is good. If the demand is there, I would certainly add another.”