By theWedge.LIVE “A New Voice For East Ontario”

The Perth Kilt Run occurred for the ninth time since its epic launch in 2010. The event earned a place in the Guinness Book of Records in 2012 for exceeding all registered numbers of runners in kilt runs around the globe. It has exceeded all records each year–even Perth, Scotland, with a population of 60,000.

The Perth Kilt Run is an idea borne in the mind of Terry Stewart in response to Mayor John Fenik asking the community to drum up a celebration of its 800 year-old namesake in Scotland.

“This year our routes were more scenic along the Tay River,” says Event Leader, Mary Stewart. “The whole event was also held in the Tay basin.” Each year, the event evolves with new activities and changes keeping the event fresh for loyal visitors.

The Perth Kilt Run is an event of scale clocking an impressive 1,948 registered runners in 2018. On June 23rd, the beautiful town of Perth spilled over with visitors.

“2018 was the best ever,” exclaims Stewart. “The route was amazing. Everybody thought it was the best.”

The Wee Lads and Lassies run will not be forgotten. Can anything be more endearing than witnessing a 2 year-old in a kilt racing (waddling) toward the finish line. Enjoy our video capture. Playing under are the wonderful, Clan Daestyn.

Many bands played during the day. Clan Daestyn opened for headliner, Mudmen. The music was exceptional and kept everyone on the balls of their feet. 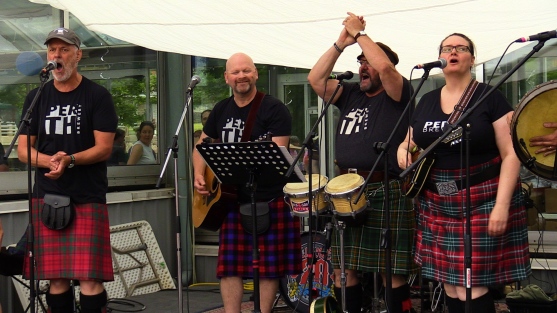 The 2018 Perth Kilt Run had a new feature. This is first year dogs were to compete in Stewart Park in the Dogs of Tartan Cross Parade.

The Haggis Toss event counted 100 participants. A frozen ball of haggis inside sheep’s liver weighing 1.5 pounds was airborne over 100 times. The hilarity of this activity is not lost on anyone. 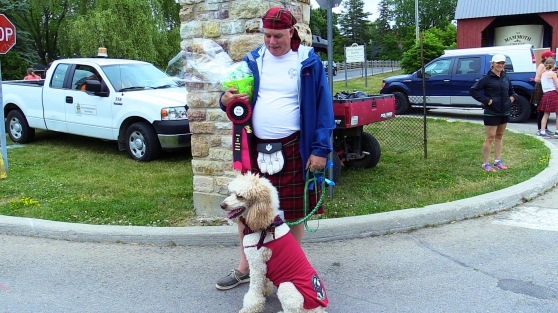 ABOUT KILTS, TARTANS AND BLUE FACES

Perth was a sea of tartans–many wore the Lanark County tartan designed by the Village of Lanark. Men, women and children were to wear authentic kilts in order to compete : flat at the front, two straps on the side, knee-length and pleated at the back. Undergarments were not specified.

Even the Lead Car was covered in the Stewart tartan.

The blue paint on many faces has no historical meaning according to Stewart. It was likely inspired by the movie, Braveheart.

Tommy Somerville from Perth won the 8K in the mens’ competition. A young woman from Nairobi, Stellah Jepchirchir, won the women’s 8K.

Here are the official results.

Each event raised thousands for Multiple Sclerosis Society of Canada. To date, the Perth Kilt Run has raised $155,000. for MS. This year $1,200 was also raised for cancer.

ABOUT THE TWO MARYS

The 2 Marys Inc. was incorporated last year to manage this and other events. Mary Rothfels and Mary Stewart met 1.5 years ago becoming partners in an event company whose future is already defined by the success of the Perth Kilt Run. Some of the original members from 2010 are still involved with the two Marys including Steve Scott, Shannon Baillon and Terry Stewart; Sue Matte has also joined.

The company also runs The Tiny House and Green Home Festival in the Spring.