Kemptville / SOUL OF / The Wedge / Tourism 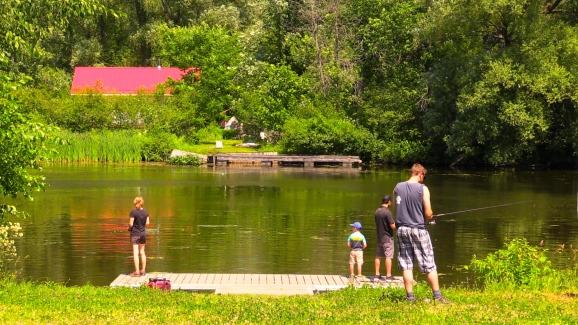 Lush, tranquil Anniversary Park on the edge of Ferguson PHOTO BY theWedge.LIVE

Until last June, my experience with Kemptville was limited to negotiating three roundabouts on highway 43 as I drove through. I muse, the town has more of them per capita than anywhere in the nation.

“You know there is a fourth one planned,” townspeople caution with a grin when I bring up the subject. The roundabouts are a wise cost saving, but their real value is comedic relief.

Evidently, Kemptville does not suffer the small stuff. The big deal in Kemptville is its heart and soul.

Locals know each other and lookout for one and other–they have each others’ backs. This might read as “gooey,” but it is real. This is a town where a stranger can fall backwards with the confidence someone will catch them before they hit the pavement. And so my search to ferret out what makes this town of 3,910* so tenderhearted began. * 2016 census

“It was the ice storm of 1998,” Jim Beveridge replied to my query about the generous spirit in the town of Kemptville. To Beveridge, it was the catalyst that brought people together. I did not expect this answer.

It is true that cataclysms tend to trigger a unified front. This storm lasted up to two weeks in a declared state of emergency, military intervention (16,000), 30 deaths and thousands injured across east Ontario and southern Quebec. In the middle of January, people were suddenly without power–for too long.

Those days forged strong bonds in Kemptville. Reportedly, people congregated at Grahame’s Bakery where the oven kept people warm and conversations lit their spirits. I suspect apple fritters and butter tarts helped along the way.

This same tenderhearted spirit is present this day. There is a palpable kindness and generosity still–all around town. In fact, I have heard the word “generous” more times in my search for Kemptville’s gravitas than any other–unprompted by this writer. My eyes increasingly lit up with each mention.

When Kemptville raise funds for each other and greater causes, the goals are met quickly–in the hundreds and thousands of dollars set. In organizing, they are eager to give a helping hand. It is all for the community–the extended family that this town seems.

I agonized about appearing syrupy; yet, the outcome of my search is just that, sweet and delicious. Kemptville is tenderhearted. Step into it and experience its smiles, its tone and eagerness to please. I dare you to locate a surly Kemptvillian among them.

This brings me to Harry Pratt, a big-hearted man who is remembered by so many; he passed, December 2015.

By all accounts, he was a paragon of virtue, and “bigger than life.” He looked after Kemptville like a hen over her chicks.

His generosity was reportedly beyond compare. Beveridge’s tone softens speaking of Pratt. When Beveridge took over for his ailing father, Pratt was there to offer insights in running B & H.

Bob Besharah (Class Axe Guitars and Kemptville LIVE fame) referred to Pratt in a metaphor, “Harry was at the front of the parade, I was at the back.” (This could be the springboard for local lyrics.) Like Beveridge, his tone softened. It seems I hit the right note.

There is no bronze of Pratt in town, but stories about his generosity and thoughtfulness are numerous. There are endless BBQs and golf tournaments named after him for good reason. Each are a celebration of his tender heart.

He “headed the parade,” yet it marches forward still.

I was introduced to John Barclay by Jim Beveridge at the Farmers’ Market. I had no idea of Barclay’s prowess as I shot stills of vendors for our last story. He is also running for Council already wearing a few hats including Executive Director of the BIA and Producer of his own, Triune Productions.

This angelic face with big blue eyes is completely invested in Kemptville, rhapsodizing about its “people” and the “community.” My case builds. 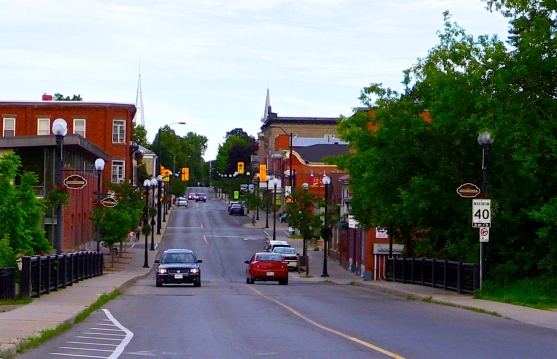 The Mayor of North Grenville (includes Kemptville), David Gordon, writes, “Known as a caring and giving community.” My findings continue to build in one message.

Nancy Peckford (related to Newfoundland Brian Peckford), a resident and mother of three tweeners, was quite prosaic about Kemptville. It’s no wonder she is running for Mayor this fall.

“And with that time comes connection, compassion, and commitment to make someone’s day just a little better, someone’s prospects a little brighter, someone’s challenges a little less burdensome. Not through changing the world or big bold acts in and of themselves- but through seizing the moment, for however long it lasts, with graciousness and humility, recognizing that our collective survival relies on one another. “

Peckford had no idea of my direction. On her beautiful words, I conclude my mission.

Old Town Kemptville dates back to 1857 PHOTO BY theWedge.LIVE

GET MORE on your town and region first. Subscribe to the wedge above right. It’s free and confidential.