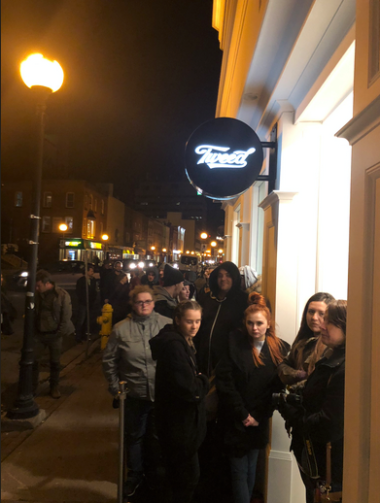 The Tweed shop swung its doors open at one minute past midnight, October 17th, 2018–in St. John’s, Newfoundland. This moment ushered in the first main street sale of cannabis in Canada.

Bruce Linton, Chairman and CEO, Canopy Growth, was present with his retinue to experience this historic moment.

“It was touch ‘n go as the plane from Ottawa was late arriving. The place was packed, customers lined-up around the corner,” reports Caitlin O’Hara, spokesperson for Canopy Growth.

“The Premier of Newfoundland and Labrador, Dwight Ball, would have it no other way,” she adds. “He wanted the province to be recognized as the first.”

Kaching! The first sales receipt for legal recreational cannabis was printed. Linton kept the merchant copy for posterity–waving it before us at headquarters in Smiths Falls later in the day. 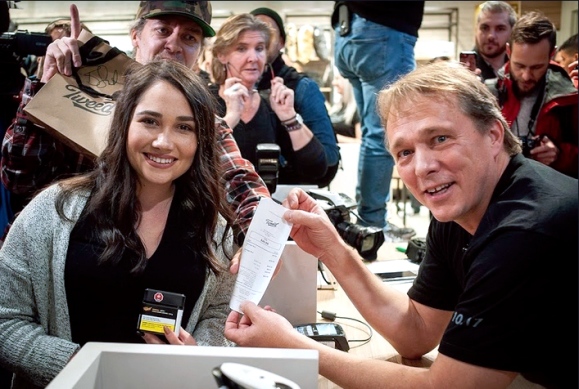 Linton arrived an hour late for the press conference–flight schedules do that. No one complained. Regional, national and international media (20 countries) were squeezed into the “sensory room” at Tweed’s headquarters in Smiths Falls awaiting his arrival.

Outside, the crowds were giddy–selfieing and squealing–you’d think a superstar was expected. Perhaps.

Linton walked into the room with Mark Zekulin, Tweed President, and climbed the makeshift stage, a Tweed stairwell. He opened on his experience in St. John’s and “one-hour of sleep.”

“We kept the receipt. Because there’s been a lot of cannabis sold and no one ever got the receipt,” Linton quipped to the media’s collective guffaw.

Never a dull moment with Linton.

“We had two first customers. A young lady who was from Labrador,” Linton reveals. “We had a gentleman who’s had a bit longer life on the planet…he had a tear. There were a lot of people there, this was lifting something off their shoulders.”

“Nobody wanted to leave the store,” Linton quipped. Another outburst from the conclave.

This was an historic hour for Smiths Falls, an historic day for Canada, placing the nation in the lead in the cannabis industry–largely due to the works of Tweed AKA Canopy Growth.

You would think we in the press scrum were celebrating the first baby of the year. We clapped, did countdowns, laughed. It’s all going too well.

“It’s a great first day. And tomorrow the headlines will be, ‘Fantastic first day, Bambi takes step, doesn’t fall down, or, Oh My, we’re out!'”

Linton knows “the other shoe could drop.” In fact, in his litany of “Brucisms” he said, “It’s a great first day. And tomorrow the headlines will be, ‘Fantastic first day, Bambi takes step, doesn’t fall down, or, Oh My, we’re out!’ ”

Linton intends to mount its first retail receipt for viewing at the Tweed Visitor Centre in Smiths Falls. One day it will be a heritage collector’s item with its own market value.  Right now this object commemorates the end of cannabis prohibition. And the start of possibilities.

Labs are now attempting to genetically replicate cannabis–investors are drooling at the prospects thinking they can undercut pricing of purist, strict manufacturing practices. I doubt consumers will relish synthetic “also rans.” GMO is a shrinking sector in agriculture. I can hear its “I’m melting” howls already.

Then there are critics opining cannabis will use 1% of the power grid. It is a ridiculous metric when you consider the total use of power. Those who leverage this statistic tend to promote alternative growing mechanisms like LED–or are feeling the squeeze of an industry that is encroaching on their turf.

All of these reactions are not lost on Linton. He has telescopic vision evidenced by all his statements.

And of course, we hear the voice of medical practitioners feeling the pressure from their pharmaceutical sponsors. Sure, there will be people who abuse this product–just as they do alcohol. I’ve not read of a death as a result of cannabis consumption. It is illicit “bad guys” as Linton refers to them who have lent to prohibition–those who profited from its hard-to-get-illegal pricing and unchecked production.

In my opinion, this day is about access–more than recreation–for people who suffer from anxiety, ptsd, insomnia, migraines, pain and a variety of diseases.

The times are changing. Bob Dylan had no idea.

STAY-TUNED FOR MORE : Stories and Videos SUBSCRIBE top-right to get them first.