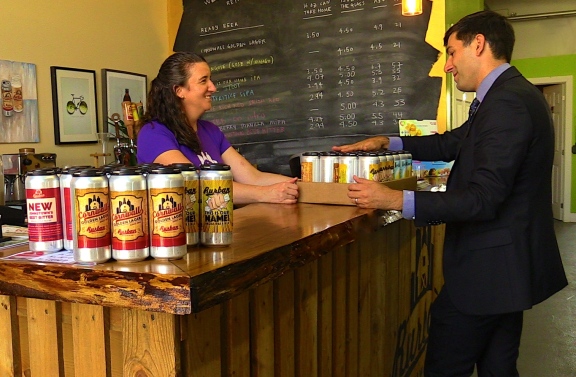 It was a perfect day when I entered Rurban Brewing‘s retail and tap room in Cornwall. The weather was balmy and the sun reflected itself on this special building beautifully. At the time, I had no idea I was standing within renown Farm Boy food merchandiser’s first location. This place has historic meaning and is in itself a source of local pride.

The attention to this space endures with its current tenant occupying 3,600 square feet, the singular craft brewery in Cornwall since December 2015–actually its only brewery for the last 100-years.

“I don’t drink beer,” she drops on me to my surprise. This brewer is as honest as she is merry. She is the default face of this popular locale and her laughter fills the place while her husband, Andy Rorabeck, stays immersed in his creations in another room. She is the tap room’s frontman, rhapsodizing about each of her husband’s creations–top notes and all.

This brewer concealed behind a plastic curtain toiled to catch up on five hours lost. Suddenly, he emerged to welcome me. The couple is accustomed to media attention and this event was no exception. They are unquestionably a power couple in blooming Cornwall.

I learned Rorabeck had been making his own beer for twenty years at home, simply for his own consumption. The man’s depth in the domain is accordingly captivating.

I was already familiar with Rurban’s most popular beer, Cornwall Golden Lager. It paired well with a spicy gourmet pizza at Cornwall’s popular haunt, Esca Gourmet Pizza + Bar. Its rich taste was everything a beer should be.

At the time seven brands were on parade at its taste bar and for sale from its fridge–a small number compared to their sixty creations. Lager, Ale, IPA, stout, bitter–all styles emanate from this brewery.

“I wanted to brew a Scottish Ale,” Rorabeck opines, “It takes a lifetime to learn.” You guessed it, he released Rurban’s 19th Strong Scotch Ale in 2016. “This beer is the opposite of an IPA, malty and tasty.” And it’s 8% strong!

The couple is very vocal about its method, the linchpin to their success : all-natural ingredients, water, malt, grains, whole or juiced fruit or fruit purees, spices, hops, and yeast,  unfiltered and unpasteurized – both in our cans and in our kegs.

“Cornwall used to be quite conservative,” they declared about not launching sooner. Reportedly, the city was entrenched in its old beer habits until Rurban opened. It seemed locals were “ready” for a change.

Just as I was winding up my visit I learned the two had met at high school, both teachers in different disciplines, history and sciences/biology, grades 9 and 10. This surely informs their new vocation as brewers. You can detect history in their narratives and precision in their work.

“There is no routine,” they bursted when I asked if they enjoyed the routine of running a business compared to teaching. “Everyday is different.”

It seems this couple is breaking the craft beer mold. They say they are “fiercely independent.” This self-awareness was evident.

Alas! Rurban does not distribute through LCBO or The Beer Store. Either you show up on Cumberland Street to get your stash or you ask for the “Beer du jour” at an endless list of restaurants in East Ontario–each visited with deliveries of kegs on a rotation schedule.