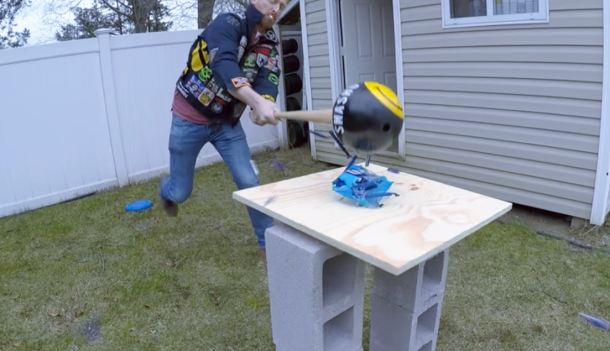 Man makes a wrecking ball from a bowling ball to obliterate Gillette products he had purchased prior to its attack on masculinity.

People are growing tired of being lectured to. Virtue signalling is beginning to backfire.

It seems brands have also shifted their narrative from manufactured value wrapped in emotional narratives to espousing strange principles, or worse, social politics.

When a company which produces commoditized little pieces of steel, Gillette, attempts to shame its male customers, it is eating its own. The company executives and their agency made a bad call–a disastrous one. Overwhelmingly in social media both men and women have rebuked their televised message this 2019.

Gillette continues to trend due to its ill-advised television commercial, a virtue signalling message longer than the usual, pitting men against women, men against men, and fathers against sons, about their “toxic masculinity.”

You are razor company, Gillette. Know your place. “Stay in your corner,” the Western world cried out.

I note its products’ prices were slashed on the shelf at the time of their moralization. Men have responded in droves with their wallets. And their mallets.

Let me be clear. This writer loves the classic man and all that it purports to be male. I do not find their masculinity “toxic.” I welcome their #MarlboroManMaleness. I don’t want them to become so emasculated that I can no longer roll my eyes when they exert themselves, boldly opening pickle jars and such.

Nor do I consider my femininity out-of-step. Our natural hormones will course through our members as they were intended to–despite any propaganda attempting to arrest them.

I knew we had not seen the back of the #metoo movement. I’m glad women have been heard and justice is ruling in their favor. Gillette attempted to co-opt this movement for profit. Pure and simple.

I am glad for the collective intelligence of the people who responded with thumbs-down–and smashing Gillette products en masse on camera.

To some degree, the Gillette commercial resulted in men keeping their distance from women. Some men were so offended at the hands of this propaganda that they leaned toward the denial of their instincts, ceasing to engage women.

Good women and men of the world, know when you are being played–divided. Follow your intended nature. You can hardly suppress it for long.

The exception are psychopaths, sociopaths, and myriad perversions–people who add up to a minority. Don’t let a maker of blades or anyone convince you that you are bad, and shame you for your masculinity.

Below revisit the Gillette social fail of the year, commentaries and parodies.