Last Saturday was not too cool, not too overcast, but filled with the unexpected.

Up the road on Sussex Drive, a bride held onto her father’s arm, her long train unfurled, cascading down the steps. Everyone stopped, waiting on tenterhooks for the tall church doors of the Notre-Dame Cathedral to open. The young woman was about to cross the Rubicon.

A few blocks away, two young musicians in full regalia played bagpipes at the edge of the great Chateau Laurier. Their music cases filled-up quickly with monetary gratitude. You could hear applause for the pop-up performers as far the Hill.

In the Byward, the most bizarre character had everyone pointing and howling with laughter. It was a car, a Honda Accord; but, this was no longer discernible. It was stacked high with soccer balls, wings, trophies, skis–endless memorabilia–even swirling hubcaps on the wheels. At each stop, selfies erupted.

Unwittingly, I ended up behind this “My-life-story-on-a-moving-asteroid” vehicle; so, I took a shot through my windshield. The lone driver wore a “Shady Brady” cowboy hat and a great big smile. And a set of woofers that turned all heads.

Ahead, the tone shifted. A Sri Lankan delegation protested terrorism migrating up Rideau to the Hill. They stayed there for some time speaking to the public about the persecution and recent murder of over 250 Christians in their country–and this event’s meaning in our lives.

Ottawa was its usual melting pot of culture and personality on this auspicious weekend—the celebration of tulips and mothers.

“We drove all the way from Toronto to see the tulips,” a young woman exclaimed in frustration.

She was under the impression the Tulip Festival would be set on the Hill–as many other tourists also believed. I oriented her to Dow’s Lake i.e. Commissioner’s Park. This is the heart of the Tulip Festival. Visitors need to turn north from the 417 onto Preston, through Little Italy. Endless tulips will appear.

The Festival runs until May 20th. Visit our What’s On page for info.

Tulip beds are peppered throughout the downtown Ottawa core–extensions to the festival’s main site. The Village of Merrickville has also been joined to the festival and took delivery of the tulips last Wednesday. This event has legs!

Reaching downtown Ottawa may seem daunting, but it’s easy if you can remember to take Nicholas or Metcalfe from the 417 and go straight north. It’s a short jaunt to the heart of this expansive city.

Parking becomes the next challenge. On Saturday and Sunday most parking is free. Try City Hall or below the World Exchange Plaza on Metcalfe (my personal favorite as it is two blocks from parliament.) You will love its white whales hanging by invisible wires above your head as you exit parking elevators.

The tulips may not have revealed their colors fully at the opening of the Tulip Festival in Ottawa; but, the city preened like a peacock. The coming weekend should be spectacularly “tulipy.”

She always takes my breath away–in all her majesty, natural and man-made. Get a few snippets below. Come to Ottawa. You will feel no less than awe.

Peeking through the stone walls on Rideau at the locks. Ottawa, Ontario, Canada. © PHOTO BY theWedge.LIVE 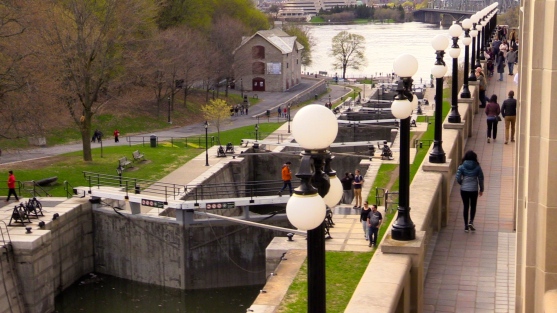 Rideau walkway is wide and well traveled on the edge of parliament, Ottawa, Ontario, Canada. © PHOTO BY theWedge.LIVE 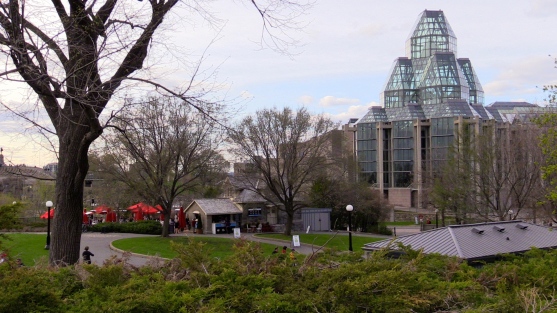 View from Major’s Hill Park of Tavern on the Hill and the National Gallery of Canada, Ottawa, Ontario, Canada. © PHOTO BY theWedge.LIVE

STAY-TUNED for surprising images of flooded areas in Ottawa. And more coverage o on amazing Ottawa, downtown and neighborhoods.