Attractions / Kemptville / What To Do

It was a “feels-like-40” morning when we visited Big Sky Ranch on the Eastern edge of Kemptville. This animal sanctuary surprised us from the moment we drove up the shaded drive. The grounds were beautiful, well-kept, for a large retinue of surprising residents.

Our first encounter with a few goats and sheep, the ranch greeters, primed our expectations for close, cuddly encounters within.

A rooster and a turkey seem to corral those already in their abodes. The rooster crowed so much I lowered my stature and said, “Be quiet!” And so he was. Wonders never cease.

Inside the stables a cat became my tour guide cantering alongside me, he and his shadow. All other animals were out in their corrals happily basking in the sun and cooling off in their huts.

We wandered to the east corrals were bovine roamed. Jacomo, the largest among them, made a b-line for me and gave me a big smooch behind the ears. Note the look in his eye. He seems to say, “she’s mine.”

Jacomo clearly had designs on me. It was love at first lick. As I walked away telling him how flattered I was, he pursued me, relentlessly moooing for my return. I have been accused of giving mixed signals before.

I flatter myself; I may have simply been a salty snack.

The two emus in my ensuing visit were not amused by my advances. Perhaps Jacomo sent a message to them. A turkey however took a shine to me (probably for silencing the rooster.)

I do a great turkey gobble; it is one of my hidden skills. So we engaged in a convo of sorts. I am not sure I insulted him though as he turned to avert my gaze. Much can be lost in translation.

A duck waddled right up to me ignoring all else to hold my gaze. It was a high-noon pause with extended silence and stillness. He seemed so Yoda-ish–much more than the turkey.

The slight tilt of the head says a lot. I think he liked me too; but, my fingers stayed on my side of the fence nevertheless. It may have been a ruse.

We spent 25 cents on permissible snacks to lure a mule to his hut’s window. He partook with a palpable Eyeore “meh.” This one has seen and heard it all before. No “eeh haw” to be heard. Zero catharsis.

Incidentally, donkey is also in my voice repertoire. Oddly, it is did not transfer to our feeder. 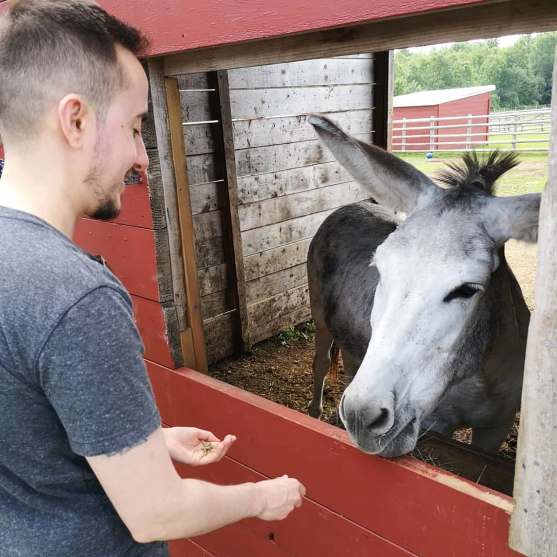 The pig pen was a tactile experience. I petted its largest tenant to my surprise–can you say bristly! She then proceeded to rub against the water container, again and again. These creatures are the least pretentious of the lot–their reputation preceeds them!

The Wedge recommends Big Sky Ranch as a destination for a day-trip unlike any other. There is no entry fee; the ranch relies on donations exclusively. Children are visibly enthralled by their access to so many animals, small to large.

Big Sky was founded by Andy Parent, a former Ottawa executive, in 2006. He purchased the 25 acres at Peltons Corners in 2002 and established it as a hobby farm.

Parent is present daily, scooting around on a golf cart overseeing operations. When absent he is rescuing animals throughout Ontario and even Quebec. A recent rescue was Jacomo seen above; his rescuer could no longer care for him so Parent drove to Quebec and collected him. 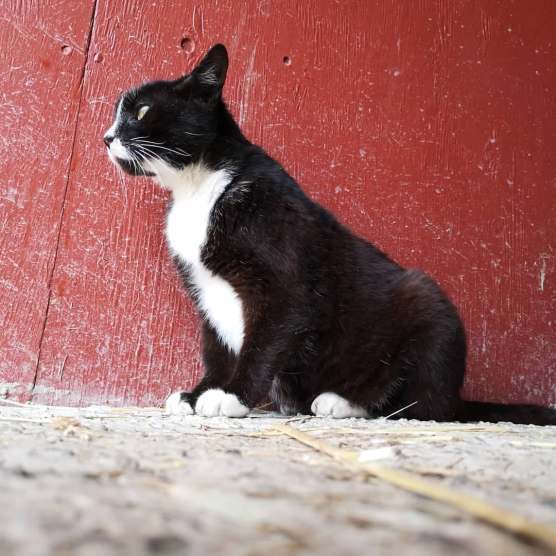 The ranch is salvation and a safe haven for farm and domestic animals in crisis. Exotic species such as lamas, emus and even a peacock are present.  The plan is to find new and good homes for each animal; it is a ‘no-kill’ sanctuary.

George Clooney has adopted a pig as a pet at his Lago di Como residence, Italy. It is quite surprising the choices families make for a pet. We once had a squirrel as a family member. He would stay close and cuddle under the sheets at bedtime. Farmers are of course ideal for adoption.

You can find directions to Big Sky Ranch through their website and once there, donate to this worthy cause. Feed and vet bills are always stacking up.

One thought on “Ranch of Wonders : The Wedge’s Top Day Trip This Month”