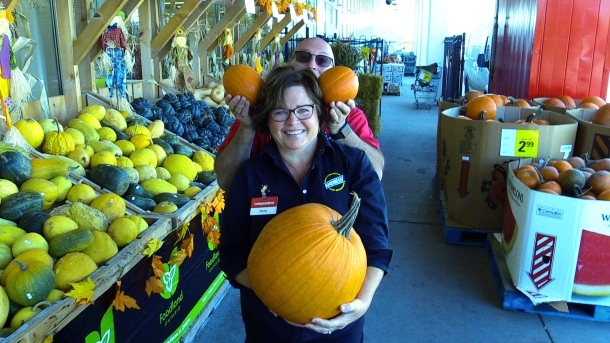 Wanita and Dan Andress weigh-in on thanks and giving, Andress Your Independent Grocer, Smiths Falls PHOTO BY theWedge.LIVE

We huddled near the Thanksgiving end-aisle, our voices down to a low pitch, Wanita  Andress, Dan Andress, and this writer. We dug into our collective treasury of heartfelt expressions for the days coming.

It was not easy in a sea of cheezy options. How can you transmit profound thanks and affection in words and pictures?

So we suspended our dilemma and opted to visit the harvest tables at the entrance. Then the show started. 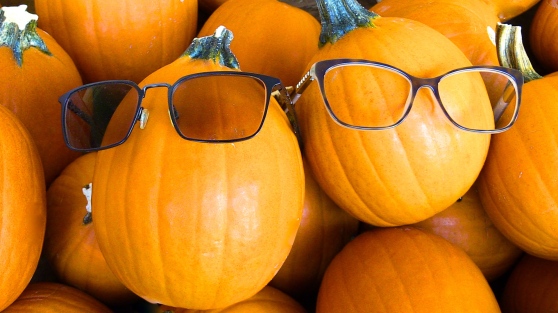 It was not my idea, the pumpkin avatar thing. Perhaps they thought this would suffice and they could escape my lens. (They were convinced they looked too exhausted on the heels of moving their home.) They’ve never looked better.

Finally, they succumbed. In usual form, Andress loves to tease his wife. Myriad placements of pumpkins were explored. We settled on the Canadian-Pumpkin-Bellied-with-Antennae creature from the patch.

These two beloved grocery leaders, owners of Andress’ Your Independent Grocer, are clearly thankful for each other; but, their affection does not end there. They love their customers with “a consummation devoutly to be wished.”

Suddenly, an opportunity presented itself in the turkey section.

Local and frequent customer, Dan Doyle, appeared from an aisle joining our “scrum.” This customer’s affection for the couple was evident. Andress introduced us, glowing about the Wedge (I felt the love too) and intimated the number of mouths Doyle had to feed this holiday. Sixteen.

I looked at Andress wide-eyed, code for “this is an opportunity!” His eyes also lit up. Off he scampered to find a 9.5 kg, fresh, Grade A turkey to gift to Doyle. I don’t know which Dan was happier.

I felt the release of dopamine from my brain witnessing this sweet moment.

On my departure, I noticed Dan Andress gifting a big cheque to three women representing Big Sisters Big Brothers. Not a bit surprised.

p.s. Andress is open on Thanksgiving until 5pm.

Directions:
1. Make the Pie Crust: Process ¾ cup flour, sugar and salt in a food processor until combined, about two 1-second pulses. Add the butter and shortening and process until homogenous dough just starts to collect in uneven clumps, about 10 seconds; dough will resemble cottage cheese, but there should be no uncoated flour. Scrape the bowl with a rubber spatula and redistribute dough evenly around the blade. Add the remaining ½ cup flour and pulse until the mixture is evenly distributed around the bowl and the mass of dough has been broken up, 4 to 6 quick pulses. Turn the mixture into a medium bowl.

2. Sprinkle the vodka and ice water over the mixture. With a rubber spatula, use a folding motion to mix, pressing down on the dough until the dough is slightly tacky and sticks together. Flatten the dough into a 4-inch disk. Wrap in plastic wrap and refrigerate for at least 45 minutes or up to 2 days.

3. Adjust an oven rack to the lowest position, place a rimmed baking sheet on the rack and preheat oven to 400 degrees F. Remove the dough from the refrigerator and roll it out on a generously floured work surface to a 12-inch circle. Roll the dough loosely around the rolling pin and unroll into pie plate, leaving at least 1-inch overhang on each side. Ease the dough into the plate by gently lifting the edge of dough with one hand while pressing into plate bottom with other hand. Refrigerate for 15 minutes.

4. Trim the overhang to ½ inch beyond lip of pie plate. Fold overhang under itself; folded edge should be flush with edge of pie plate. Using thumb and forefinger, flute the edge of dough. Refrigerate the dough-lined plate until firm, about 15 minutes.

5. Remove the pie pan from refrigerator, line the crust with aluminum foil, and fill with pie weights or dried beans. Bake on the rimmed baking sheet for 15 minutes. Remove the foil and weights, rotate plate, and bake 5 to 15 additional minutes until crust is golden brown and crisp. Remove pie plate and baking sheet from oven.

6. Prepare the Pie Filling: While the pie shell is baking, whisk cream, milk, eggs, yolks and vanilla together in a medium bowl. Combine the pumpkin, yams, sugar, maple syrup, ginger, cinnamon, nutmeg and salt in a large heavy-bottomed saucepan; bring to a sputtering simmer over medium heat, 5 to 7 minutes. Continue to simmer pumpkin mixture, stirring constantly and mashing yams against sides of pot, until thick and shiny, 10 t0 15 minutes.

7. Remove the pan from heat and whisk in the cream mixture until fully incorporated. Strain the mixture through a fine-mesh strainer set over a medium bowl, using the back of a ladle or spatula to press solids through strainer. Rewhisk mixture and transfer to warm prebaked pie shell.

8. Bake the Pie: Return the pie plate with baking sheet to oven and bake pie for 10 minutes. Reduce oven temperature to 300 degrees F and continue baking until edges of pie are set and the center looks firm but jiggles slightly (an instant-read thermometer inserted in the center should register 175 degrees F), 20 to 35 minutes longer. Transfer pie to wire rack and cool to room temperature, 2 to 3 hours. Serve with whipped cream. Leftovers should be stored in the refrigerator for up to 3 days.

HOW BEAUTIFUL SMITHS FALLS IS THIS OCTOBER

Smiths Falls view from the dams and locks this October 2019. Beautiful. PHOTO BY theWedge.LIVE