“It’s eighteen minutes to Calgary,” an Okotoks resident quotes as the town’s driving distance from Calgary. It just seemed further with the wide open land and distant mountains en route from Calgary.

Suddenly a new world opens up. They say, “Okotoks is a bedroom community.”

The town of 30,000+ residents is named after a “big rock,” quartzite that broke away from the Rockies and landed on the town’s Western outer boundary. It migrated over 30,000 years ago (that number keeps showing up) on a glacier from Jasper. Fittingly, it’s also called “The Okotoks Erratic.”

Today, it is a major tourist attraction, a hotspot on Highway 7 en route to Black Diamond and onward through the Rockies.

But this town is a lot more than its rock. Its people are exceptional.

I attended a sales event at Nutters–mostly women–a few days ago and could not help notice a pattern. The women were exceptionally turned out and beautiful. Ironically, their chariots tended to be large, muddied pick-up trucks. (It’s a Western thing.) It’s also more than outer beauty; they oozed serenity.

There is this thing about Albertans. It’s more precious than black gold.

In Okotoks, the pace is slower and the spirit is strong.

The Sheep River runs right through the town, seeming to draw a line through the old and the new. Olde Towne Okotoks is replete with local shops, cafes, galleries and ephemera.

I wandered in and out of these places meeting that same kind, high spirit through every door. Behind one, I discovered Tyler Langdon, a luthier, one who makes string instruments. One room was well stocked with rare slabs of wood awaiting new life.

Langdon performed for me on a smaller viola, also made by his hands. I watched, I listened as he morphed from a maker of instruments to an impassioned, classical musician. It was a magnificent moment in my day.

“What were you listening to before I entered?,” I quizzed him. “Heavy metal,” he answered, “I turned it off before you entered.” We both shared a good roar over his counter-intuitive proclivity. Sometimes, you just need to breakaway from a “mono-culture.” 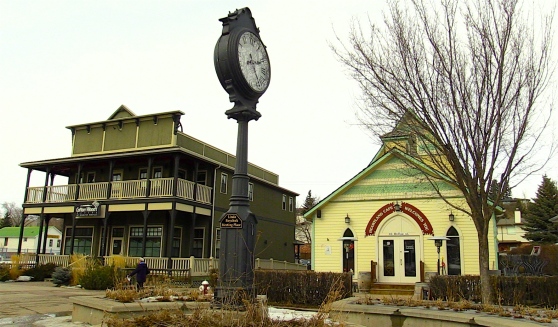 Elizabeth Street is to be explored from one end to the other. Every storefront conceals extraordinary experiences within.

There is a bakery at the road’s far end, French 50, operated by Marie Denis and family. We discovered we shared a past as Montreal ex-pats with French names–and a French tongue.

On Friday nights, Denis’s husband begins baking at midnight and by Saturday afternoon the shelves are bare. They sweep the place and close for the week to tend to their full-time jobs. Clearly, baking is a passion.

Then there is Elma Street.

An employee of Rhoda’s, a women’s apparel shop on Elizabeth, prodded me to visit “Take The Cake,” yet another bakery-slash-cafe on Elma. Nestled among homes, this venue did not quite fit her description, “it’s like someone drew with crayons all over!” Evidently, she was referring to its exceptional design.

This is a popular haunt it seems.

Unfortunately, I missed it by a hair as it closed at 4 p.m. I peered in and the interior did not disappoint. I hope to eat cake here before my departure. I imagine it will be as delicious to my palate as the decor is to the eye.

STAY-TUNED for Maggie’s Marathon through Okotoks businesses, shops and food establishments. And more stories on this exceptional town.