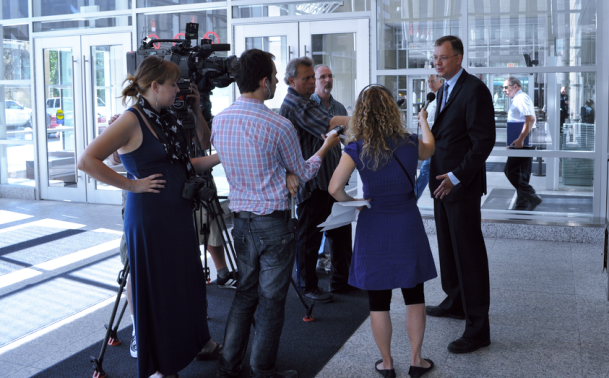 When we first heard of the tenets of Bill 10 sprinting suddenly from the Kenney government in Alberta, we could not believe it.

When we read it, we could not believe our eyes. When John Carpay, head of national organization, the Justice Centre, returned this writer’s call, we surrendered our rose-colored glasses. Our assessment was confirmed.

We were incredulous. Shaken.

We believed, as many did, Alberta was the last bastion of freedom in Canada.

We had held up Premier Kenney as a populist–a leader for the people of Alberta. The Wedge had a scuffle with a Global TV hack over their lack of respect for him at a February press conference. Our admiration as that of most Albertans was profound.

Bill 10 was passed in 48 hours–1st, 2nd, 3rd readings and royal assent–on April 2, 2020, without any public notice. It is an amendment to the Emergencies Act.

So frightening are its powers, that it is perhaps the most totalitarian Bill passed in Canadian history.

It seems the contents of the Bill issue from a national mandate and medical tzars in Ottawa loyal to the WHO, a global organization under fire for bribery, its deference to the communist regime in China and a litany of errors in regard to the Coronavirus from same.

It’s no surprise as Kenney is an avowed federalist.

Kenney will soon be forced  to choose fealty with overt action and less rhetoric (or whining.) A “federalist” moniker is stoking a populace twitchy from Ottawa’s active decimation of Alberta’s resources and livelihoods. Bill 10 may have uncloaked a leader Alberta has not known until now.

Now, we shift our hope to the Justice Centre.

Carpay, a constitutional lawyer, is spearheading a legal challenge to this overreach of power.

The Justice Centre has filed a legal challenge to Bill 10, the Alberta Public Health (Emergency Powers) Amendment Act, 2020. The United Conservative Party used its majority to pass Bill 10, on April 2, 2020, in under 48 hours, with only 21 out of 87 elected MLAs present and voting on the final reading. Bill 10 has come under intense public criticism for providing sweeping, extraordinary, and nearly unlimited powers to any government minister at the stroke of a pen.

Prior to Bill 10, the Public Health Act already gave extensive powers to Cabinet, the Minister of Health, and the Chief Medical Officer in the event of a public health emergency. These existing powers included taking citizen’s real or personal property without consent, authorizing entry into a person’s residence without a warrant, requiring mass immunization of the public, and requiring mass public testing. Under these existing provisions, a minister could suspend – for up to 60 days – the operation of any existing law. These powers have never faced a constitutional challenge.

Adding to these existing powers, Bill 10 now allows a single Minister to unilaterally make new laws and create new offences for the populace without consultation with the Legislative Assembly. Bill 10 also raises maximum individual penalties for violating the Public Health Act to the eye-watering sum of $500,000. The Public Health Act amendments extend the power of Ministers to make new law for a period of up to 270 days, or even longer.

The Alberta Government claims that it needs extra “flexibility” to respond to the coronavirus. It also has denied that Bill 10 gives any new powers to create law. In response to concerns, the government initially claimed the changes were “minor” and “technical” in nature.

Concerned Albertans wrote scores of letters to various UCP MLAs, expressing their objection to the government overriding the principles of democracy and constitutionalism. Various MLAs responded with a form letter which claimed that Bill 10 “does not create new powers for politicians to implement any law that they choose during an emergency, as some critics have claimed.”

The assertion from the MLAs has been shown to be demonstrably false, as a new Ministerial Order does precisely that. Minister Shandro has utilized Bill 10 to unilaterally create new law by himself, bypassing the Legislature. Bill 10 added section 52.1(3) to the Public Health Act, which allows the Health Minister to ”make an order without consultation”. This provision was utilized to amend the Public Health Act so that “information obtained by the Chief Medical Officer” can be disclosed to “any police service”, as “police officers need to know whether an individual has tested positive for COVID-19” to allow police the ability to comply with quarantine orders.

However, the newly added provision is poorly worded and drafted broadly enough to allow for the blanket release to police of the records of all Albertans who have tested positive for COVID-19, and perhaps even the medical records of those who have not.

Minister Shandro’s new law contains no safeguards outlining the use, storage and retention of the personal data by police. It is unclear why the names of people who once tested positive for the virus and have recovered should be conveyed to police, or how long this information will remain in the police’s possession. There are no limitations on how the police may use this private and personal information. There is no clause that mandates that the information will be destroyed at a later date. Providing the personal information of patients to police so that it can be accessed at the police’s discretion is in effect a warrantless search without judicial checks and balances, and an alarming breach of privacy rights.

Knowledge of whether an individual has, in the past, tested positive or negative for COVID-19 opens the door to abuses of power, discrimination and over policing, which is an increasingly problem in Alberta.

“Minister Shandro’s unilateral creation of new laws without legislative involvement illustrates the extraordinary power that Bill 10 has given one politician. Minister Shandro’s new law is broad, and has all the markings of an unconstitutional intrusion on the lives and personal information of Albertans, and in our view constitutes an unjustified infringement of the right to be secure against unreasonable search or seizure as protected by section 8 of the Canadian Charter of Rights and Freedoms. The Constitution protects against the unreasonable sharing of personal information without consent by and between government bodies,” notes lawyer Jay Cameron, Justice Centre Litigation Manager.

“Individuals have a reasonable expectation of privacy regarding their personal medical information, including and especially the results of laboratory tests. Individuals who have consented to COVID-19 testing have done so expecting they have constitutional rights to privacy of their medical information,” adds Mr. Cameron. “The existence of a declared public health emergency does not suspend the protections of the Charter.”

To date, most provinces across Canada are managing the state’s response to the coronavirus without attempting to suspend democratic and constitutional checks and balances regarding law making. The Alberta Legislature continues to be available. Further, the Public Health Act’s emergency transfer of power from the Legislative Assembly to the provincial cabinet date back to a time when it would have been near-impossible for MLAs to meet in person. In view of today’s technology, there is no reason why the Legislature cannot meet virtually as necessary and required.

Justice Centre President John Carpay characterizes Bill 10 as ”a betrayal of the electorate and of the rule of law.” He notes that Bill 10 allows “a single politician to behave as though he or she has the power of a legislative majority to make laws for millions. This is an affront to democracy and constitutionalism.”

With many courts currently closed or highly restricted to criminal law and some family law matters, the usual checks and balances are not in place to protect citizens from government abuse.

“In a public health emergency, if a cabinet minister creates a new law under this amended Act, democratically elected MLAs will have no opportunity to challenge the legislation, request amendments, and take a stand against government overreach in an effort to represent the views of their constituents. A legal challenge is necessary to bring judicial oversight to bear over the actions of the government,” concludes Carpay.