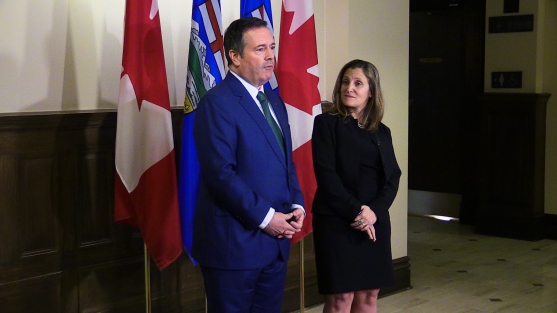 As many of our readers and visitors know, the Wedge is rolling-out nationally, now covering B.C.. Alberta, Saskatchewan as well as Ontario. (Provinces will be added progressively.)

We launched our new national video channel “The Wedge” today with this January 7th event in Calgary: a third meeting between Alberta Premier Jason Kenney and Deputy Prime Minister of Canada, Chrystia Freeland. The press event took place at the MacDougall Centre in Calgary prior to their meeting. It was exceedingly short with no questions allowed by media.

Here is our live coverage below. Read further for the Fair Deal points sought by Premier Kenney.

Oddly they spoke of ratifying NAFTA–not CUSMA. Slip of the tongue?

Freeland spoke of methane and NAFTA. This was ostensibly a photo op for the two leaders–a show of collaboration. The national networks and the Wedge left with little to report.

Albertans are on tenterhooks, not expecting much on the heels of the carbon tax and Quebec announcing its surplus on the back of Alberta’s largesse. To wit, Alberta expects a ruling from its highest court related to the carbon tax this winter, riding on its unconstitutionality.

The outcome of these meetings is hard to gauge. Many Albertans are looking to secede, tired of the assaults on its economy since the 70s. There is a great deal of suffering in the Province.

While Wexit is on everyone’s mind, the truth is an exit is already occurring at high velocity. The relocation of Encana to Houston is one one of a litany of substantive corporations not waiting for a constitutional challenge of epic proportion.

Fair Deal Town Halls are occurring in many Alberta towns right now led by an illustrious panel. The public can voice its opinions and ideas at these events.