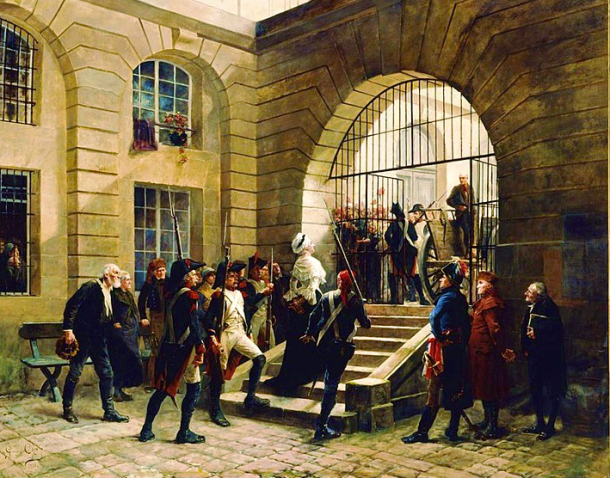 October 16, 1793 – Marie Antoinette walks up to her tumbril from the conciergerie where she was imprisoned.

On this day, October 16, 1793, Marie Antoinette left her prison, her head shaved for the event ahead. She climbed onto the commoner’s tumbril, walked the scaffold and laid her head on the half moon headrest below the guillotine. WAP! Her head rolled into the basket below.

The populace celebrated the end of the French monarchy one more time, throwing up their hats, drowning the sound of beating drums shouting, “Vive la republique!”

Maria Antonia, an Austrian subject, was only 14 years old when she was wed by proxy to France’s King Louis XVI.  She was imprisoned in the conciergerie for months beyond her husband’s death. Her hair turned white from sorrow and fear. Her young son was removed from her despite his suffering from tuberculosis. He died under cruel treatment not long after her execution.

This was a horrible, cruel end, no one should wish on their worst enemies. 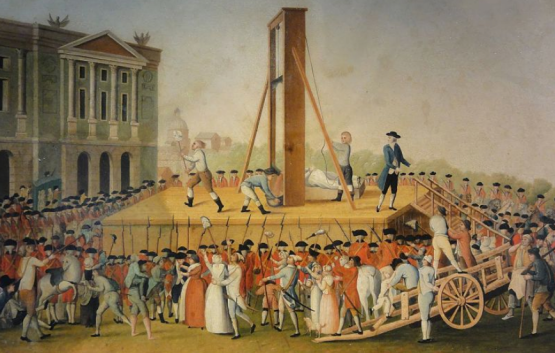 King Louis XVI is decapitated in Paris, his head paraded on a bayonet by executioner Sanson’s son. This revolution spelled the end of the monarchy in France in January 1793 .

The French monarchy’s end pre-dated this horror with the severing of her spouse’s King Louis XIV head in January of the same year. Many nobles met the same fate.

In those days, there was no internet–just notes, reports and rumors. It was fairly easy to launch a word-of-mouth campaign within a population fidgety and starving as a result of a frost and failed crops.

“Let them eat cake,” as the Queen’s response is said to be a rumor. Another whisper campaign circulated that Seigneurs of the day were aiming to cut already low wages further. Nevertheless, the proletariat was pushed to the edge of tolerance as they witnessed the excesses of life at Versailles and among the nobility.

Marie Antoinette, the last Queen of the French monarchy.

You cannot preen in carriages and ostentatious finery whilst your people struggle to feed themselves. In the 18th century, there was a gaping, wide divide between the haves and have-nots.

The fate of this last French monarchy is no surprise. It was the end of inequality.

Will we learn from history? Is it about to repeat itself within a few years? Technology is presently throwing people out of work. Within five years, unemployment will be a tsunami. Robots, autonomous vehicles and AI will crush the concept of employment. This is how fast the new world is moving.

THE NEXT FIVE YEARS AND A WARNING FROM TECH LEADER

Listen to the warnings of this visionary technocrat. This is a ‘must hear’ 34 minutes that can bring everyone up to speed–the newly elect especially.

“I don’t see enough jobs for human beings,” he states at 25 minutes in.

“What happens when the work disappears?…People don’t want free money…I worry about 10s of millions of people rebelling… Wanting to burn down the tech companies…”

The construct of universal income is being paraded about to replace the lost jobs e.g three million truck drivers in USA.

Will this be this era’s, “let them eat cake?” And a swift response?